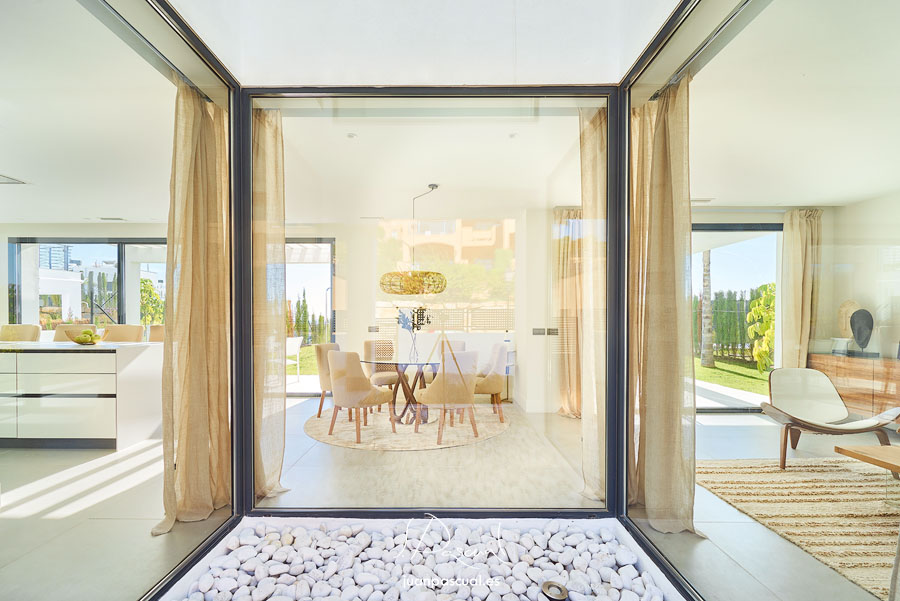 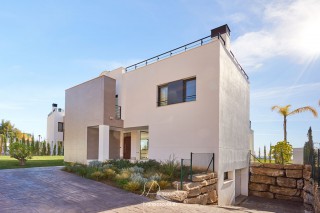 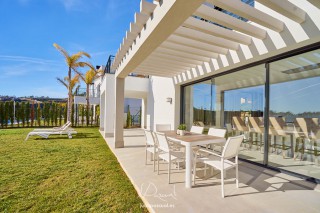 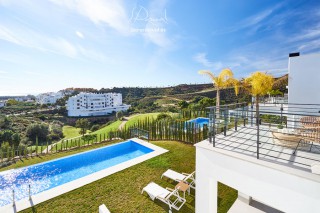 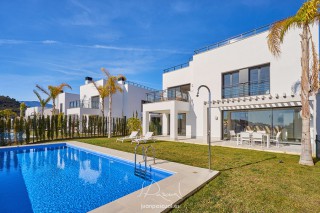 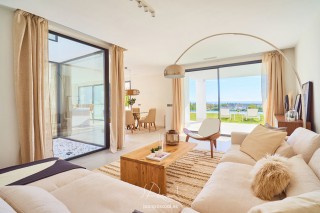 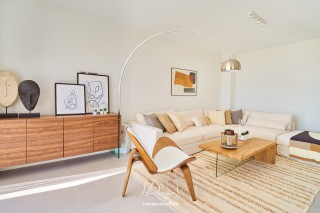 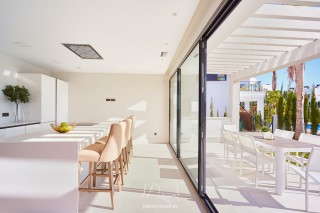 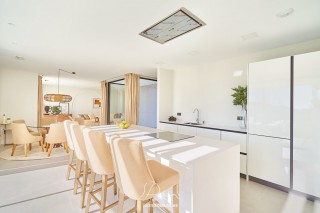 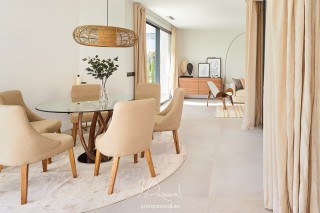 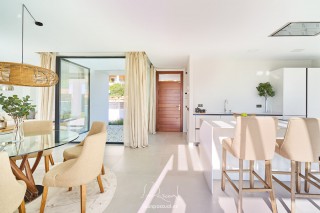 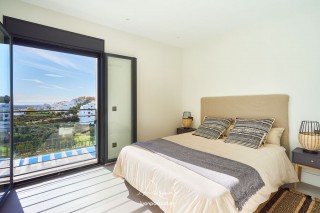 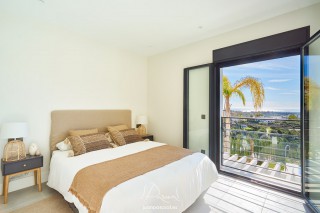 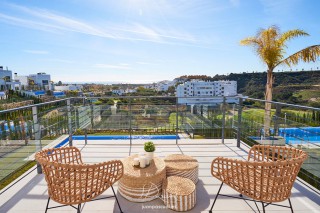 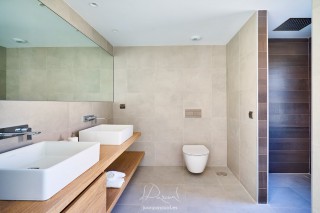 Professional architectural photography reports in Malaga, Marbella, Estepona, Benalmádena, and Sotogrande.
I start this new entry with a villa built in Benahavís, Málaga. The first photograph is of the original windows in the living room and kitchen of the house's front, next to the entrance door. We can see in the background the large glass sliding doors leading to the garden, facing south.
The following image is of the house's exterior in a backlit side shot from the entrance to the garage, taking out its north and west sides and with the next villa in the background.
With its South orientation, the terrace and part of the house's garden, you can enjoy the sun throughout the day. I made this report at noon on a winter day. The ceiling with thick decorative white beams stands out. There follows a view, from the balcony of one bedroom, of a large part of the garden, swimming pool, the golf course of the urbanization, landscape with sea and mountains near the town of Estepona in the background. In a photograph with the magnificent pool in the foreground on the left and the house occupying the central and right parts of the scene, we can also see two more villas, identical to the one that is the subject of this report, in the background. We now go inside, starting with two living room photographs, the first taken from the corner of the sofa and looking outside, and the second taken from the sliding glass door leading to the garden towards the inside, with all the furniture in this room. 2 more photos of the kitchen follow, one with the terrace table on the right, the sliding doors that separate inside and outside in the centre, and the kitchen on the left of the image; The second is a diagonal shot with the living room in the background on the left and the kitchen occupying the closest planes in the centre and right of the frame. Photography architecture Malaga Marbella. A living room photo was taken next to the curtains that cover the windows at the entrance to the house, with the dining table on the left and the exit to the garden behind. One more image of the living room, now taken from the entrance door from the terrace, with the dining table in the foreground on the left and the dining countertop on the right. This photographic work's first bedroom has large exit doors to its balcony, with views of the golf course and the sea. The second bedroom is identical in shape and distribution to the previous one, but on the opposite side. The terrace of the main bedroom, with its 20 m2, always in the sun due to its south orientation and the absence of buildings that can cast shade, can be used a lot, such as this set of armchairs and tables mounted on this show floor with a view of the sea ??in the background, the photograph was taken at noon in December. We finish with a shot of the main bedroom bathroom. Photography architecture Malaga Marbella Madrid reports on the Costa del Sol and in the capital of Spain.
The second photographic report in this blog entry in the Malaga Marbella architecture category is of a house in the Golden Mile, located between Marbella and San Pedro de Alcántara, where I usually work.
FEATURED ARTICLES 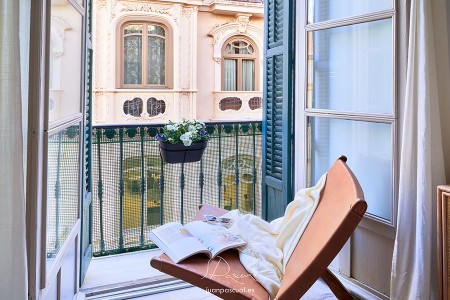 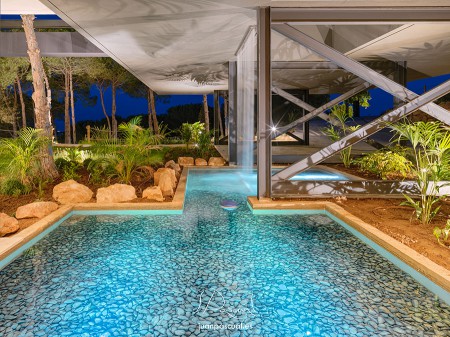 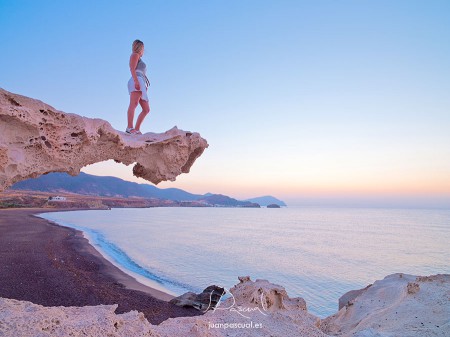 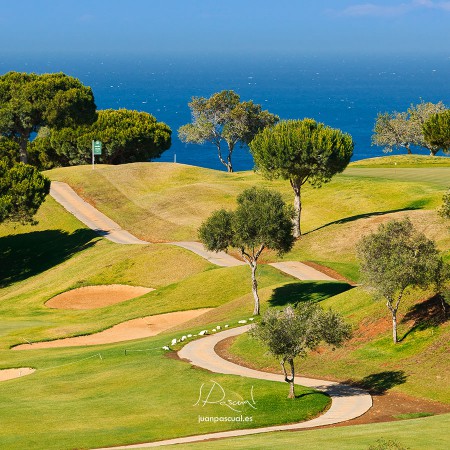 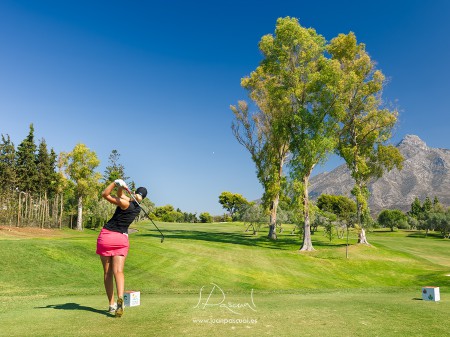 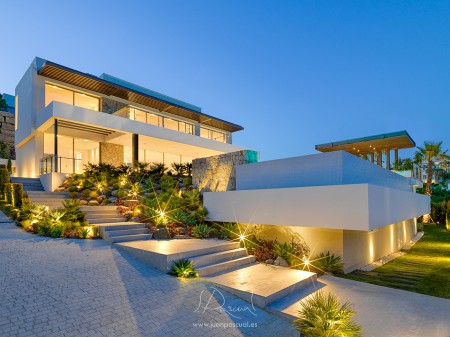